In the Blue Chair: Reana Malori 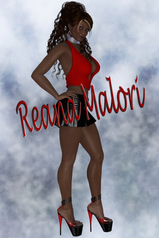 We have the pleasure of being able to our interview this month with the riotous and fun, Reana Malori!

RB: Reana, tell us about your latest release.
Reana: Escape to Heaven is what I call my labor of love. Adele Woolner is a woman who had been trapped in an abusive marriage for several years until one day, she found the strength and the chutzpah to take a stand and get out. It follows her change from a scared woman who lost her way to a woman who was willing, and able, to do whatever it takes to protect herself. Along this journey, she meets five fabulous men who become her rock - her foundation - as she grows stronger. The love of her life, Stefano Indellicati, is a protector, an Alpha through and through, and isn't afraid to make sure Adele knows he's not going anywhere.

There were some tough scenes for me to write in the book and I agonized for months….months, I tell you….regarding the right way to portray Adele without making her weak. I needed to show that the person you'd never think would be stuck in a situation like this is the one person who just may need the most help. Plus, another struggle was Stefano. I had to make him strong enough for her to know that he would be there - no matter what - but not so overbearing that he became unlikeable. Yeah, this was a toughie for me, but I'm so happy with it. I've received a wonderful response to this book and it called to people on many levels, which is all I can ask.

RB: Why are you attracted to writing interracial stories?
Reana: Well, there just weren't enough stories with women like me. Once I discovered that interracial romance was actually a genre and I could purchase books such as this - I went absolutely out of my mind. I bought every book I could get my hands on. Mostly hard copy at first and then I found….E-BOOKS! But then it seemed like things fizzled. I found a handful of awesome writers who spoke to me and their characters were “like” me. Not just is skin tone, but in attitude and approach. I realized that if I was hungry for more stories like that, then there had to be other women (and men) like me. So I decided to try my hand at writing. My goal was to give readers another option. Someone else who understood that a black heroine could be strong, educated, sassy, larger than a size four and yes….attracted to and in love with a white hero.

RB:Which genre is the hardest to compose?
Reana: So far, paranormal….I have a couple of paranormal shorts and it's hard to try and get just the right about of fantasy mix in there while still keeping it realistic for the reader. Of course, I could go off and create all sorts of stories with wolf-shifters who only eat vegetables, or a vampire who loves the sun and refuses to drink blood while having an office job and lives in the projects….Wait, maybe that would work!! Okay, no - I think I'll pass and stick with trying to write books still have a sense of reality - even as a weave this tale of love and romance and yes, the occasional wolf shifter who's six feet three inches tall with a killer smile, a crazy bank account, and a big….house!

What? What did you think I was going to say???

RB: What is your best quality as a writer?
Reana: I will only publish a story that I would want to read. Also, I tend to write the words as they come into my head, so I don't force things. The story has to be natural and if it's not, then I step away until my mojo comes back. Bottom line--if I wouldn't spend the money in order to read the story, I'm not going to put it out there for others to purchase. It does a disservice to not only me as an author, but to all the wonderful people who have read my stories.

Plus, first and foremost, I'm still a fan. I go out of my mind when a favorite author publishes a new book. That's something that will always be a part of me. Because of that trait - my absolute love for books - I'll never get too big for my britches, because I can relate to the folks who read my books. On any given day, I can sit around and swap stories about the latest book I've read and they'll know that it's honest and true.

RB: Do you feel as if the characters live with you as you write?
Reana: Oh yes, absolutely. Okay, so don't call me crazy (even though we all know I have my moments)…but my characters tell their own story. For every single story I've written, the characters speak to me and I simply write what they have to say. As I'm writing, I can visualize the the mannerisms, the facial expressions, I can hear the inflection in their voice, and see them walking around in their environment. If they stop speaking to me and I find that the words on paper are “my” words, then I know the story isn't going in the direction it should.

RB: As an author, what genre would you like to write, but haven't tried?
Reana: Historical. I grew up reading stories about Highlanders and the Haute Ton. That's where I fell in love with the Alpha male personality. I could escape and not only be another character, but I could live in another time….Wow!! How awesome would it be to provide that same experience for my readers? Explaining the clothes, the scenery, the language and all the interesting ways people interacted with each other back in the sixteenth century. That's the one genre I would love to tackle one day, but I'm not sure how well a sassy, educated, black woman would do in that time. Maybe a time travel would work, but who knows. My brain hasn't fully grasped that concept just yet and it's still a dream at this point.


RB: In your opinion, what are the three most essential ingredients of a HOT story?
Reana: First--emotion so strong that you can feel as it jumps off the page. I mean the kind of emotion where your stomach gets butterflies and your eyes water because you can just “see” the hero declaring his love for the heroine. Where he has stripped himself bare only for her. Yeah, that's hot.

Second--the bedroom scenes, or kitchen scenes, living room scenes, or….well, you get the picture, should be about more than Slot A into Slot B. There has to be a true connection between the two characters in order for the scene to mean anything - otherwise, it's just words on paper.

Third--I have to know why the man wants the woman and vice versa. The characters have to be appealing not only to each other, but to me as a reader. I should be able to visualize the characters so that I can “see” it when the heroine is describing his six-pack abs or strong, muscular thighs, or ripcord biceps.

RB: How do you combat writer's block?
Reana: Walk away and wait for it to clear. My Muse….yeah, she's kind of iffy. She gets an attitude at the drop of a hat and will pack a bag, flip me off, and walk out the house while calling me a five-letter word under her breath. When my Muse has left, she is good and gone until she's ready to come back. I've tried to force it (thinking I knew better than she did) because I was bound and determined to finish a story. Well, it turns out I had to delete the entire thing. I learned my lesson real fast. When the story isn't coming to me, it's best to get up, grab a glass a wine and open a book and enjoy myself until a later time.

RB: What classic novel do you wish you'd written and why?
Reana: Sense and Sensibility. I love the story. I think it tells the story of a woman who accepted the world as it was and didn't try to change things to suit her needs. The character of Elinor Dashwood is someone that I know many women still identify with. She puts herself second due to her sense of duty and her acceptance of things that simply cannot--should not--happen to her. Unwilling to take the risk, she was willing to let the love of her life walk away rather than take a leap of faith and grab happiness for herself. She was viewed as cold and unfeeling, but I suspect she felt things more deeply than most. She just never had the freedom to express it.

RB: What would you classify as your favorite type of drink? Why?
Reana: Disaronno Sour. It's smooth with just the right mix of sweetness and tartness, while not allowing the alcohol to overpower the taste. Once you take a sip, it makes you stand up and pay attention because you never expected it to taste that way. Not everyone likes it, but the taste is unlike any other drink I've ever tasted. However, the trick is to get “Disaronno” and not just “Amaretto.” Trust me, there's a difference in the taste.

RB: What is it like being one of the Badazz authors?
Reana: It is the most amazing thing. It's like being part of a family that knows the challenges and struggles you experience in life and understand what you need, right when you need it. The support I've received from the women in the BadAzz Authors has been tremendous. When I first came on the scene, they pulled me into their circle of trust and I quickly realized that these were women that I could really connect with. They could be my best friends down the street and around the corner who I would hang out with on Sunday's drinking mimosas and cooking out on the grill. Plus, no matter what, I know if I'm having one of “those days” and I just need to vent, they'll be there. That's a great feeling.

RB: Your editor just phoned and said she needed you to host a banquet dinner tomorrow and she needs you to prepare enough food for sixty guests, plus do a book signing. Do you stay calm? And what menu would you delight the guests?

Reana: Oh yeah, I stay calm. Then I let her know that I will need the corporate credit card, because there's no way I'm going to pay for it myself. Nor will I be cooking the food, because that ain't gonna happen--at least not in this lifetime. I would then call a caterer who could prepare the food in twenty-four hours, with staff, and tell my editor not to complain about the costs unless all those folks will be turned away and told to go grab a taco somewhere.

Once the call was made and things were settled, I would go to the book signing and do my thing. A smile would on my face the whole time. Never let them see you sweat baby.

RB: Reana, can you please give us your website, blog, myspace, Facebook or other links for your readers?