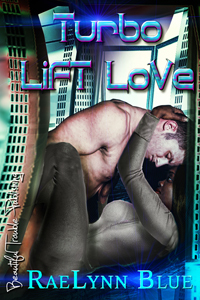 Blurb: Upon graduating from the cadet training academy, Janna Jameson's career as a spaceship engineer is bright, shiny, and full of promise. However, assigned to the galaxy-class spaceship Sirius, she’s managed to incorrectly configure the rear thrusters, burn out the food replicas in cafeteria six, and lose both her glove and her left boot—rookie mistakes that Janna suspects aren’t. Nevertheless, she's off to a rough start. Summoned to the captain's meeting room for a meeting that has been weeks in the making, Janna swears her day can't get much worse, until the turbo lift comes to a shuddering halt. Janna’s not simply trapped inside a turbo lift; she’s trapped inside a turbo lift with the one man who excites her more than a brand new stunner array—Trent Taylor.

Years ago, newly promoted junior commander Trent Taylor held back his love for Janna to allow her to pursue her career—a necessary choice that pained him. Finding himself locked inside a turbo lift with Janna, he's going to take full advantage of his second chance. He’s never wasted an opportunity before—and he’s not going to start today.

The turbo lift’s metallic doors opened softly, and she stalked through them, her entire demeanor spiraling down toward dangerous. Her hands itched to punch something, or better someone—Pike would be first in line.

“Evening, private,” came the deep resonate and knee-weakening voice that made all the female soldiers simply sigh in unison when he spoke on the ship-wide communication.

Janna closed her eyes and swore. On a spaceship filled with thousands of privates, civilians, soldiers, and commanders, why did she find herself alone in a turbo lift with her secret academy crush—Commander Trent Taylor?

The Fates truly hated her.

The doors closed in a soft hush. Her sour luck became amazingly clear and she did have to grab the wall to keep from seeping into the floor. Why her? With him? Right now? She opened her eyes and with a deep breath of courage, she turned to face him.

Her. Alone. With. Trent.

Her insides quaked at the sheer proximity to her dream man. She met his eyes—a bold, brilliant amber. She noticed the small, polite smile on his kissable mouth. Beneath the fall of his thick, dusty brown hair was a strong nose. He hadn’t changed much in the five years since academy. He still had those deliciously broad shoulders and a chiseled waist that begged her to wrap her legs around him. Muscular thighs filled out the uniform’s multiplex materials. They’d cushion her as she rode him to glory. The man simply was sex appeal wrapped in a uniform. More than his good looks and natural charm, she had fallen head over heels with his personality. Trent had been simply that guy who couldn’t possibly be real, but amazingly was.