Grab some LUCK this Weekend! IRISH LUCK is here!! 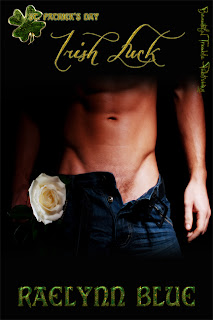 Blurb: Kenyatta Kramer approached the annual CAKE St. Patrick’s Day bash with trepidation and fear. Her workplace crush, Doran Richards—a sexy, hunky and handsome Irish lad—would be there also. In the last six months, CAKE had become a hot bed for office hookups. Kenyatta didn’t want to become another office fling, despite how much heat Doran’s dark blue eyes conveyed. Their chemistry could set off fire alarms in three states, but she didn’t want to be the topic of rumor and office fodder.

Doran Richards had been waiting for months for St. Patrick’s Day. Being the son of Irish immigrants, hard work and dedication had been instilled in him. Tonight’s goal—Kenyatta. He knew her reservations, but he also knew how right they were together. All he needed was a little Irish luck.

Doran sipped his beer, winced at its bitterness, and tried to look relaxed. With the raucous partying going on around him, he could barely hear himself think. Not that he needed to actually hear himself think. His eyes worked fine despite the din. Across the room stood his entire world—Kenyatta Kramer. Seductively dressed in a hunter-green outfit that hugged every curve as tightly as he longed to. Kenyatta’s body trembled with laughter. The familiar sound rang out clear and musical, even though he couldn’t hear it from his current position. Standing beside the punch bowl with Cree Caruthers and another woman he did not know, Kenyatta listened intently, her head tilted to the side. The tips of her bobbed, ebony hair were dyed green for St. Patrick’s Day.

He doubted that she saw him through the throng of CAKE employees and Silver’s business associates. But in case she did, he had put on his best outfit—dark blue jeans, crisp white button-down shirt, and black, Italian leather shoes. Around his neck hung his golden four-leaf clover charm. His mother had given it to him, and he wore it all the time. He smiled at the memory of her handing it to him on his 18th birthday. This would give him luck—Irish luck, she’d said. That had been nearly twelve years ago before he’d buried her and his father. The charm had brought him luck—and tonight he planned to use it once more.

Kenyatta bit her lip and tucked her hair behind her ear. Doran’s dark blue eyes locked with hers and she couldn’t look away. Infectiously, she smiled in response to the one lighting up his face. He set her lust on fire. A couple of other single women spoke to him as he made his way toward her. To his credit, despite how many women threw themselves at him, he hadn’t taken any of them up on their offers—or at least from what she could tell.

He set down his full mug of beer, moving through the crowd like a panther on the prowl. Seeing something primal in his walk, Kenyatta grew wetter. Inside her, every nerve ending responded to the way his muscles shifted beneath his clothing, the way his eyes seemed to send electronic signals directly to her love button, and how right now the only thing she wanted was his mouth on hers, her body pressed so close to his she could feel his heart beat.

“Hello Kenyatta,” Doran’s deeply rich voice bowled over the party’s din when he reached her. It lodged itself right in her heart.

She loved the sound of his voice. Like rich coffee, it had a full-bodied flavor that melted her into droplets of pure want. He was born in America, but she knew his parents had been Irish. The way he pronounced certain words spoke to his heritage and his Boston upbringing.

OTHER STORIES IN THE GSO SERIES:

all available at http://www.beautifultroublepublishing.com/
Posted by RaeLynn Blue at 6:13 PM