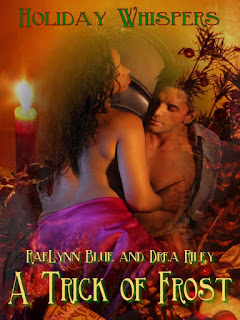 I've been blessed to have written with some extremely talented authors. By far, author, Drea Riley stretched me the farthest in terms of creatively and with patience. We worked like a whirlwind together--sometimes creating an entire story in two days and other times taking two years. Through it all, she made me a much better writer and infinitely more patient with my own characters' voices. For that, I am forever grateful.

Here are two of our most fun works together.

Blurb: Two days before Christmas with her ex-husband, Rick, harassing her parents, Jaycee Froste needs a gift to lift her spirits. She stops in at her favorite restaurant, and it brings more than a hot meal. Jaycee finds herself seated across from one of the most annoying and handsome men she's ever met. She would even consider letting him taste her stew, if he hadn't stolen her reservation. With the holidays upon her, Jaycee decides the thing she needs to lift her spirits is J.C., a man who offers her so much more than she ever could have hoped.

Tabitha had the hots for her sexy boss, Seamus Dooley. There was something about him that she couldn’t quite put her finger on…but her finger wasn’t the body part she wanted to meld to him.

Seamus felt the same way about his sultry waitress and bar singer. However, he realized that as the heir to the Fae and Djinn kingdoms, he would place her life in danger if he acted on his feelings.