A New Spot in the GSO: Tulips for Tonica Available Now... 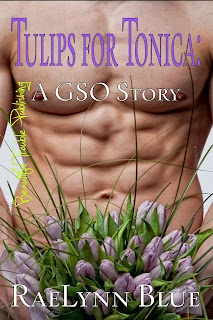 Blurb: Carte Seay has admired Tonica Faye since the summer she interned at his uncle's law office. He'd sent her tulips every day, anonymously, because she reminded him of tulip's versatile beauty and ready resourcefulness. He set a plan in motion to get the woman of his dreams into his life, not just his bed. Now, his chance had come again to capture Tonica's attention, and set her into his life for good. Tonica was just want he wanted, no, what he needed, to feel again.

Private Investigator, Tonica Faye, knew more about high profile lawyer, Carte Seay than anyone. She'd been investigating him in at the behest of a client, one who claims Carte Seay sired her two children. For the life of her, Tonica can't figure out why the man just didn't sort it out with a paternity test, but then, maybe men as powerful at Carte Seay didn't bother. But when she meets the legendary lawyer, up close and personal, what she discovers about herself and him forces her heart to bloom, to awaken in ways no man has ever managed to do before. Carte Seay's tulips were made for Tonica.

When the waiter vacated her view, Tonica noticed that Carte had moved. In fact, he was gone! She frowned. Where the dickens had he got off to in such a short time? She looked toward the door. Nope. The driver remained seated at the table. Restroom? Maybe.

She put the menu down on the table and stood up. Adjusting her coat, she slung her purse onto her shoulder and headed to the restroom. Her sneakers squirted cool water between her socked toes and she grimaced. When she reached the ladies restroom, she slowed and pretended to dig into her purse searching for some lost item. She wanted to see if she could wait until Carte came out of the neighboring door.

She fished around her bag, counting to twenty. If he hadn't appeared by the time she reached twenty, she'd make a show of going into the restroom.

"You lose something miss?" asked a voice so velvety smooth, Tonica's ears actually relaxed. "You can use my cell phone if you need to call someone."

Tonica looked up and in to the most vivid verdant eyes she'd ever seen. Like emeralds, they held her fast. Fire and shrewd intelligence burned deep in those orbs. Carte Seay. In. The. Flesh. Dressed in an immaculate navy suit, Carte gave her a smile so sinful, so full of carnal promise, she nearly came right there. Untouched, no foreplay, nothing but his smile beamed at her.

A smile that had disarmed so many prosecutors and allowed so many paying clients to walk around free. Tonica reminded herself of whom she dealt with, "not some Swiss god, but a walking cancer,"--a defense attorney.

Wheat-brown hair seemed to pulsate around him. Cut long in the front, and shorter all around made his eyes seem all the more green, and the fine line of stubble sprouting along his jawline made him look less polished, but rugged. Like sex with him wouldn't be stilted and boring, but rough and rugged." Good Lord help her.

"I, uh, I..." she stammered, unable to make herself think past that alluring smile. Strong white teeth, even and handsome in his luscious mouthâ€"a mouth made to suckle her nipples, kiss her clit and make her melt. Yep. That mouth. Right. There. She swallowed.

"I noticed you're eating alone," Carte said, smirking now at her. "You could eat with me, at my table."

"You?" she spat through a wad of horniness and horrible indecision.

"Yes." He frowned at her and then his eyes brightened, his face relaxed. "Oh, yes, forgive my bad manners. You have no idea who I am..."

Tonica had every idea of who he was, and despite the allegations against him, the fine ass attorney held her to the spot and drained all logical thoughts from her brain-except for one. The one operating her libido.

I'm Carte Seay." He extended his hand formally. "And you are?"

"Um, oh, Tonica." Her brain misfired under the heat of his gaze.

Damn it. She can't believe she gave him her real name. Olivia was going to kill her, kill her for sure.

She shook his hand, and he let his fingers linger on hers. So soft, as if they'd never done a day of labor--ever. Those palms would feel so nice cupping her breasts, gliding down her stomach to her beating desire. Slipping into her wet heat, thumbing her clit and making her hot.

"Very nice to meet you, Tonica. When you come back from the restroom, you will join me at my table," Carte said, taking his hand back with another small smile. He looked at his hand and then back at her. "I insist."

"I don't think that's a good idea," she said, blushing, feeling her whole body flush from his touch. "Mr. Seay."

With that he turned on his Italian leather-shod feet and headed back to the seating area.

Tonica swallowed hard. That bit of lust hurt going down her throat, all raw edges and panic. Already, she spied the waiter going to her table and collecting her tea to take to Seay's table. Shit. Shit. Shit. She didn't know what the hell had just happened.


Enjoy this new title in the GSO series. If you haven't grab a copy of these titles in the series.