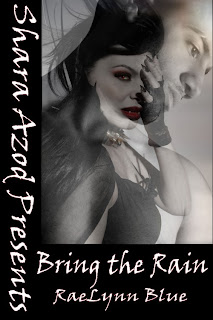 Blurb: It has been five long, rain-soaked days since anyone had heard from priest Dash Lowery. Evelyn Sharpe has waited and has believed in his return. Just because she was undead didn't mean she couldn't love. And she loved Dash Lowery.

Dash Lowery's many years knew that his many years of priesthood had failed him. He was not prepared for the night a vampire lord called him to his castle. Summoned by a vampire--a priest--it sounded like the beginnings of a joke.

Nothing could've prepared him to be turned to a vampire by night's end. After five agonizing days, he had a decision to make. Go back to Evelyn as a new man, or start his new life over in eternal darkness alone.

Despite the cloud coverage, Evelyn and Dash will bring the rain.


Evelyn hiccupped. “You didn't do this just for me?”
“No, as much as I love you, I did not. I was attacked and turned,” Dash said. “Once I came to accept my new, uh, life, I use that term loosely, I knew there was only one thing I absolutely had to do.”
“What?” she whispered.
“See you,” he said. He got up and stalked around the coffee table.
Folded up on the sofa, Evelyn watched him with careful eyes. Not knowing what she would do, he had to do what he came to do. Rejection had always been a small possibility, but then that is the risk he would take for Evelyn.
“To talk to you, to touch you…” He kneeled in front of her. Her legs had been folded under her. Like that would keep him from touching her. He leaned forward and kissed her sating clad knees that poked out of the robe. “To kiss you.”
Evelyn let out a noise akin to a moan, but more base, animalistic in its origins, had he not known it came from her. He did it again, planting a soft kiss onto her other knee. When he looked to gauge her reaction, he noticed she'd relaxed some. He shifted his body and stood on his knees. His hand found her hair. The silky strands ran through his fingers. Her hair was so soft. He hadn't expected it to be so luscious and smell so strongly of lavender. He tightened his fist in it as he brought her lips down to him.
“I want you forever, Evelyn,” he breathed a second before he kissed her.
Although she didn't verbally respond, she put both her arms around his neck, yanking him closer as if she meant to inhale him. He, in turn, opened his mouth wider, granting her access to all of him. He'd never kissed a woman the way he did Evelyn. So much tension and passion built from years of denial broke free the moment his lips made contact with her sweet mouth. The soft mewing sounds she made only added more fuel to the fire of carnal hunger raging inside him.
Maneuvering her fangs and his took some doing and he nipped her bottom lip with one of his in his rush to taste all of her mouth.
The bubble of blood that protruded on her lip teased him a bit. Evelyn's pupils grew large and she eagerly licked it off. Then, she stuck out her tongue and offered a taste to him. Without words, Dash understood what Evelyn had offered him--her blood--her life--her. He sucked her tongue gently, tasting the metallic flavor of her and beneath that the sweetness of her love.
When they broke from the kiss, he didn't release her from his embrace, he gently tugged her head to the side, exposing the slender curve of her neck. He inhaled her scent, lavender, as he drifted down the beautiful slope of her neck. He took his incisors and gently raked them up her neck to the sensitive spot behind her ear. He kissed the spot causing Evelyn to press harder against him, encouraging his already hard erection to continue to grow. Taking her earlobe into his mouth he nipped it, causing her to moan in a tone that spoke to her need---their need.
He didn't know how it happened, but he and Evelyn had become one with each other.
“Dash, please,” Evelyn said softly, writhing against him, her hands on his butt, squeezing it beneath his cloak where the material was more sheer. Her nails dug into his roundness of his buttock and he couldn't help thrusting forward in pleasure. Her soft body melded into his hard, muscular one. She stood at the right height for him, as if she'd been molded to his specifications.
“I love you. I have always loved you,” she confessed. She kissed his chin.
He gazed down at her for a long minute, and she grew still staring back up into his eyes.
“You are telling the truth,” he said with a smirk.
She laughed, but it was husky and rough from desire. “Why would I lie?”
Dash answered her with another kiss in joy. He'd been sure she loved him, and he knew with certainty that he loved her, but he didn't know how she'd react to him being turned.
“Evelyn, are you in agreement with my turning?” he asked softly. Sure, it could kill the mood but he had to know.
She ceased massaging his arse long enough to meet his eyes. A man could get lost forever in the rich green of her eyes. There he saw not denial or lust unchecked, but adoration and love.
“Dash Lowry, I love you, and I stood out in the rain that night you disappeared.”
She loved him. Renewed, he ravaged her mouth, kissing her so hard, he heard her squeak. He stopped at once and panting asked, “Are you well?”
She grinned at him. “Yes, do it again.”
He laughed softly. He moved away from the sofa, and Evelyn didn't. “Where are you going?”
Dash shook his head. “I won't have my first night with you be on a sofa in a parlor.”
Evelyn rushed to him and hugged his middle tightly. “I do not care where we are, only that you are with me.”
Dash smiled down at her. He freed himself from her embrace and picked her up, sweeping her off her feet. “Your bedchamber before I explode and ruin your fine rug?”
The End
Get a copy of this sizzling vampire title at Shara Azod, LLC or http://www.amazon.com/dp/B006PAMRHI
Posted by RaeLynn Blue at 8:27 PM