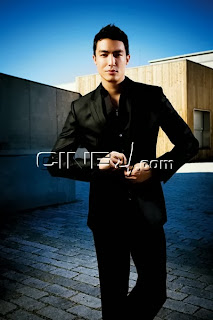 Each Monday, I am going to spotlight one of the characters in my books. To kick off this series, actor Daniel Henney, is the inspiration for Kao Chen, dragon shifter, attorney, and clan member of the Xiongxin.

Although Kao hasn't found love of his own yet, he is instrumental in helping others find their mates. You can see Kao in action in Firebreather and White Tiger Christmas. Check out all the Dragon's Keep series today. If you have, post some comments and share your positive thoughts.

A few facts about Kao Chen:

1. Is a cousin to Ryuu and Draco via their father being his uncle.
2. Despite his youthful appearance, he is over 200 years old.
3. A fierce dragon both on and off the court.

Meet Kao for the first time in Firebreather.

Excerpt: “I’m here. Sorry for keeping you waiting,” Kao said with a shake of his head when he reached Ryuu. Clad in a dark trench coat and sporting a briefcase, he waltzed by the uniformed policemen shepherding a string of scanty-clad people across the hall. With his close clipped dark hair, and almond-shaped eyes, he looked both dangerously smart and totally harmless. Ryuu knew Kao to be a fierce dragon—both inside and outside a courtroom.
They embraced.
“Firebreather, such an honor to see you again.” Kao spoke in low tones.
“The honor is mine, Kao. They won’t release Draco. I’ve asked repeatedly.” Ryuu gave Kao a brief recap of their conversation with the detectives. Naturally, he left out all the details of his mating with Angelina.
“I see.”
Kao put his full attention on the two professionally dressed policemen and addressed them.
“I’m Kao Chen, and I request to see my client. Since a member of the Council is here, I assume you know which person I’m referring.”
His English was perfect despite being one of the last languages he’d mastered. Kao was a master attorney.
Detective Ross lazily nodded. “So, who are you?”
“Mr. Li Jin’s attorney.”
“So, is that the way this is going to happen? You dragons come up in here and push us around? Is that it? Try to intimidate us.”
Kao shook his head. “I’ve only just arrived; however, I’m certain Mr. Sho Jin has made my client’s bail. Please, release him, according to the law—with speed and great haste.”
Ryuu took a step forward. “There’s no intimidation here. I’ve requested Draco’s release repeatedly. You’ve made no visible effort to release him.”
“He’s a flight risk.”
“The judge didn’t see it that way.” Kao replied with a swift rebuff. “My client.”
Kao always acted in a matter of fact way, and dealt only in those things that could be proven. Ryuu had only had limited contact with the attorney due to their age difference. Kao was over two hundred years old, despite his relatively youthful human appearance. It also meant he didn’t have a lot of patience. When one’s lived as long as he had, he’d seen almost everything.
End Excerpt for Firebreather
~*~
Kao makes another appearance in White Tiger Christmas. Read the following excerpt.
“Um. Hello? Is this Zina?” came the short somewhat arrogant tone.
Zina flinched, looked down at the screen and noted the unknown number. She put the phone back to her ear. “Yes, this is Zina.”
Her tone wobbled. She pushed her bleak musings about Kento aside.
“It’s me, Kao.”
Kao. What’s with her and men whose names start with K. She sighed and sat down on the bed. Last night, she’d given him her number, only to infuriate Kento, and to pay him back a little. Still, she couldn’t deny that she liked Kao.
“I realize it’s late, but I just got off from the office. If you haven’t eaten, I’d like to take you to dinner.”
“I’m hungry, but I don’t want to cause you to come out of your way. I can meet you somewhere.”
What am I doing? I’m in my nightclothes. Ready for bed.
She glanced at the time, and then the empty bed.
“Great. Do you know the Madison’s Pancake House?”
Zina grimaced, thankful Kao couldn’t see her face. She absolutely knew the restaurant, 24 Hour diner. More than she wanted to know. It was only a few blocks from The Rocketeer Bar, and it was a favorite hangout of The Sirens’ band members.
“I can’t wait to see you. Say in about thirty minutes?” Kao sounded genuinely excited about it.
It became infectious. Because as Zina ended the call, she enthusiastically hurried to the shower. Thirty minutes, sure she could make it. Her stomach rumbled in anticipation of eating Madison’s eggnog flavored pancakes. Coupled with their legendary coffee, Madison’s meant food heaven. She scrubbed her body, towel dried it, and lotioned in rapid session. Dressed in black jeans, scarlet red sweater, and black stiletto boots, Zina placed her hair into afro puffs and added her big gold hoop earrings. She pulled on her peacoat and headed out into the dark, cold night.
And into the warmth, golden glow of good company and tasty pancakes.

End Excerpt for White Tiger Christmas
Posted by RaeLynn Blue at 12:30 AM