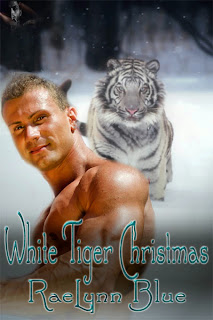 It's STILL freezing outside! January winter has arrived with all the ferocity of a tiger--a white tiger.

To help keep you heated and warm, here is a white hot except from my latest release, White Tiger Christmas.

Blurb: Zina was sick and tired of longing for Kento from afar. One minute he seemed interested, the next minute he was flirting with some floozy all in the name of work. Yeah, right. Well one thing for sure, she wasn’t going to spend this holiday longing for a man who couldn’t see the forest for the trees. Besides, there was a hot dragon shifter just begging for her attention…

Kento wanted Zina with every fiber of his being. But knowing how most humans feared the dragon shifters that had revealed themselves, how could he ever tell her he was a tiger? The fear of rejection kept him tucked away in the friend zone. Until a dragon came sniffing around his woman. Little did Zina realize what a dangerous game she was playing when she agreed to go out on a date with a dragon. She was about to catch a tiger by his tail, and he for one had no intention of ever letting go.

There are characters who also appear in my Dragon's Keep series story, Seadragon.

The hulky Kento slipped into the booth, sucking in his girth as he did so. The tiny electric-styled dressed café consumed a small space of the corner block of shops. Designed for skinny college students and mostly women, it didn’t offer a lot of space. Kento leaned onto the table with both arms and it titled toward him. Her tea mug slid a few inches toward him. Zina smiled, unable to stop grinned at the sight of Kento squeezed into such a tiny booth.

“No, not at all. There’s no contradiction to my devotion to you…”
“Good…”
“I do have a confession.”
Zina nodded, as she reclaimed her mug. “You’re a shifter.”
Kento’s shocked face made her laugh.
“H-how did you know?”
“I put it all together. Two plus two and all that…”
All the tension, the fear, and the anguish dissipated with his grinning, but astonished face. The man was simply too damn sexy for his own good.
He grinned.
She shrugged. “You gave me enough clues.”
He arched an eyebrow. “Did I?”
“Earlier I thought I couldn’t stand the opportunity you presented to me…”
“I pushed too hard…”
She put her hand up to silence him.
“Your, um, abilities, didn’t frighten me.”
“No?”
“No. It surprised me too, at first. But I realized you must have amazing control for no one to notice, not even Draco, a dragon shifter himself and who played in the same damn band with you for years.”
“I do have fierce control over my beast.” Kento shot her grin and shrugged like it was no big deal.
“Beast?”
Kento shifted around in his seat, looking even more miserable. “I, yes, well, can we go someplace private? I can order your creamy tomato soup to go.”
Zina laughed. “Did you say, beast?”
“Yes.” His smile crumbled around the edges a little bit.
“Don’t get all in your feelings, Ken. Tell me everything.”
The wattage on his smile increased. She packed up her purse and got out of the booth. Kento did too, and it cracked her up seeing how he managed to slide his massiveness free. He gazed down at her.
“Next time, we’re getting a table.”
She laughed.
He smirked, but then grew serious. “You want to know everything?”
Standing next to him always made her feel small despite her 5’ 5.” Dwarfed by Kento, Zina wanted to wrap herself inside his hugeness. Now, she wound what he shifted into. A yeti?
He snatched her to him and leaned down to face her as close as his girth would let him. Everything about his felt hard, his torso, his thighs, and his belt buckle that dug into her upper chest.
“Good. I plan to give you everything, you understand me, Z?” The heat pooling in those gorgeous eyes made her wet.
He smelled like fire and fresh cut wood. Still wearing his dress clothes from the office, Zina wondered just where he went to search for her-a forest? Another question for her long list of inquiries. Maybe if he refused to answer, she could tie him down and torment, tempt?, his carnal desire until he told her everything—or until she was satisfied, whichever came first.
“Promise to tell all.” Zina ran her hands up his sweater and along the bristles sprouting across his lower jaw.
“Always, my love.” Kento kissed her fingers lightly.
It came out husky, almost animalistic, but instead of being frightened, Zina’s body tightened. Oh, she liked that.
“Get a room!” Yelled a customer and it grounded Zina from the ninth cloud.
She’d gotten lost in the reflective ochere of Kento’s eyes. How had she missed that all those years? For some reason she never knew his eyes could do that.
“Let’s go.” Kento hurried toward the exit, nearly dragging her.
“Hey! Remember, for each step you take, I gotta take twelve!” Zina stumbled, thought about her soup but realized she wasn’t that hungry anyway. Damn him for stirring her other desire.
Kento stopped abruptly outside the exit doors. He seemed to come alive in the crisp evening air. The color to his cheeks returned, and he seemed more relaxed, at ease, as if the café had caged him.
“Where do you want to go?” The winter moon, full and brilliant, hung behind him in the velvety night sky. It cast his face in partial shadow, only his eyes loomed in some illumination. It was strange, but those glowing orbs reminded her of something familiar and perfectly normal.
Cats.
Kento’s beast must be a cat, of some kind.
“Tell me where you want to go and I will take you. Out here is just too vulnerable--exposed.”
She quirked an eye at him. “My house.”
“Out of anywhere in the world, that’s your choice?” Kento peered down at her with heat smoldering in their orange-brown spheres.
“There’s no place like home. Besides, I have a feeling, you’re going to be spending a lot of time there.”
Zina blew him a kiss and headed to her car. Leaving Kento flabbergasted in her wake.