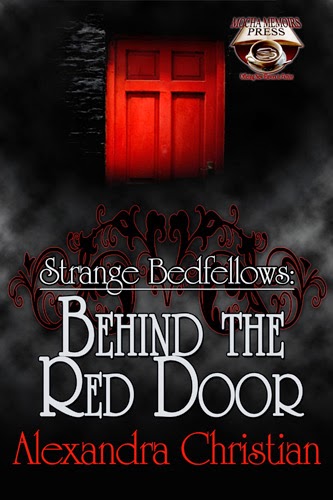 Mocha Memoirs Press presents a sexy and decadent collection from The Southern Belle from Hell, Alexandra Christian. Step behind the Red Door and enter a world unlike any you have seen before...

Welcome to The Oubliette.

Cali Barrows has had it with love. After wasting three years with the man she thought was the love of her life, she finds out that he’s been sleeping with his boss. Broken-hearted and bored, Cali’s life had become a string of TV dinners and tawdry romance novels. She wondered where her life was going until she followed the mysterious stranger through the red door and enters a world that few would ever know existed.

The Oubliette is a safe haven for all those creatures that go bump in the night. They cater to a very particular clientele and only those who seek it out may find the red door leading into a dark paradise of otherworldly delights. Together with her vampire hosts, André and Leo, Cali becomes a matchmaker for the undead and unwittingly gets herself into all sorts of mischief, all the while slipping into a decadent world where every sensual desire is fulfilled.

Head over the Mocha Memoirs Press to grab this amazing collection. This is in print!
Posted by RaeLynn Blue at 10:34 PM